Artificial Intelligence and the eCommerce customer service conversation: what to bot!

AI and chatbots have been such a huge topic for us and our customers at ROBIN this past 12 months that we’ve put together a two-part, deep-dive blog post in which we will help you:

The future is coming… but no one quite knows when!

Depending on which headlines pop up in your feeds, AI is either set to become the saviour of humanity, or its ultimate downfall. And the timeline ranges from ‘it’s already started’ to ‘never in a million years’.

Take, for example, Elon Musk’s prediction in 2014 that killer robots will be running amok by 2020. Crushing (at least in part) his own prediction, Musk, Google’s Deepmind founders, and others signed a document promising never to make killer robots — which is very nice of them indeed.

We’ll come back to Mr. Musk later. But first, it’s worth knowing that the folks responsible for actually developing the field of AI were much more cautious about their predictions than today’s futurists.

Wiener was a child prodigy, Professor of mathematics at MIT, a philosopher, and one of the most famous scientists of his time. He is widely recognised for founding the field of cybernetics in the late 1940s.

Centred around the idea of ‘machine intelligence’ he pioneered advances in robotics, computer control and automation, and incorporated approaches from neurophysiology, psychology, and more in his work.

In 1948, Wiener claimed that intelligent human behaviour could be modelled in a computer. Wisely, he didn’t indicate how long it would take.

Fast forward to the summer of ‘65 and John McCarthy, a young Assistant Professor of Mathematics at Dartmouth College, organised a summer workshop to brainstorm about the future of ‘thinking machines’.

He coined the term ‘Artificial Intelligence’ especially for his workshop, and assembled some most brilliant minds to participate. He predicted that together they would crack many of the toughest AI problems within just 8 weeks, and develop a fully intelligent machine by the 1970s. Of course, none of this happened.

By the 1980s, McCarthy had become more circumspect. When asked when he thought the public would have autonomous domestic robots in their homes, he responded, “Somewhere between 5 and 500 years”.

The moral of this little story is that predicting the future of artificial intelligence has always been a fool’s game. So instead we’ll look at the promise and potential of advanced tech in eCommerce through the lens of Amara’s Law.

This rings very true to us.

‘Relativeren’ [rey-lah-tiv-eer-in] is a Dutch word. While there’s no direct translation, it sort of means to level the playing field and keep things real — something of a national sport here in The Netherlands, and at ROBIN too.

In that spirit, here’s three things we think everyone should know when it comes to AI:

Artificial means made by humans. That one is easy. Defining intelligence is trickier. Just as we have maybe nine, eleven, or even twenty-one senses, there are at least eight forms of intelligence.

IBM computer Deep Blue beat chess Grandmaster Garry Kasparov in 1997. That was the first time a computer had beaten a Grandmaster. Chess is a complicated game. But there are only 32 pieces, 64 squares, restricted moves for each piece, and a clear set of rules for ending the game. Deep Blue won, so it must have had some sort of data-smarts for sure. But does that make it mathematically intelligent?

Another example is emotional intelligence (EI). EI has only been a mainstream concept since the mid-2000s, and is considered a crucial type of intelligence for bringing up a child. EI involves recognising the emotions in yourself and your child, then filtering and expressing them, and using them to inform your actions. Of course, there’s nothing even vaguely approaching this in any sphere, anywhere, in machines.

Ultimately, there is no one agreed upon definition for human intelligence let alone one for machines. The deeper we dig, the more ambiguous AI terms become.

“Because of the term 'neural networks’, people think we’re creating artificial brains. The truth of the matter is that we really have no clue how the human brain works — let alone that we can build a computer that works like the human brain”

Knowing this, it shouldn’t be a surprise to read an article about a 24-year-old MIT inventor who has invented, ‘A New Device Can Hear Your Thoughts’ — only to find out that, as the inventor says, “It can’t actually read your mind. And will never be able to do so”.

The bottom line: Be sceptical about AI claims.

#2 AI is a collection of technologies that mimic human behaviours

In the broadest terms, AI is about machines doing stuff like humans can. Put like this, it should be easier to imagine how individual technologies can be combined in different ways. Some examples:

The bottom line? AI is an umbrella term for a collection of technologies — mostly old, some new — which are being assembled in different ways.

#3 AI doesn’t need to be smart to have value

As a kid, you may have imagined droids solving humanity’s biggest problems. But many experts say that this sort of Artificial General Intelligence (AGI), in which a machine can apply its intelligence to any problem rather than just one specific task, is not even theoretically possible.

But AI doesn’t have to be super-intelligent to have value. Take, for example, the world’s first AI powered toothbrush. It is smart enough to remember your brushing patterns and also kind enough to send your smartphone a message about the spots you’ve been missing while brushing. All just to keep your teeth in good shape — we love it!

The bots we see in eCommerce are one such example.

There’s such an array of bots out there that we find it helpful to categorise things into two big buckets:

Let’s take a closer look at each type.

The majority of today’s online bots follow pre-programmed rules to a strict yes/no logic — nothing more, nothing less. They can’t actually understand what you are saying (or type) and are not designed to do so. They simply respond to trigger words, phrases, or clicks.

However, as the example from flow.ai illustrates below, these bots are great for automating straightforward tasks. If you want to manage simple questions, with simple outcomes, you can be up and running in no time with one of these bots.

In 2018, retail brands are spending more time and energy figuring out use cases for automation. And this is happening across industries.

Over the past 12 months cosmetics brands such as Sephora, Estée Lauder and L’Oréal have all rolled out various chatbots. Some of these are built inside the big messenger players like Facebook, while others are ‘proprietary’ and live in a brand’s web store.

Used for marketing and sales, these virtual assistants help with everything from showcasing portfolios, product matching, and up- and cross-selling.

When in-store, shopper bots are sometimes connected to other data sources (such as stock management systems or customer relationship management systems) that may incorporate some machine learning techniques to deliver better results. But more often than not, they don’t. Instead, a programmer will optimise responses after reviewing some analytics.

The travel industry is also big on bots, using them to automate and optimise booking services. Booking.com built an in-house bot that is a good example.

Earlier this year, Booking.com said their in-house bot resolved half of all questions within five minutes. This was a big improvement from when it was first launched. While five minutes may sound like a long time for resolving queries, they noted that travel questions can be complex and varied.

To summarise: Despite the claims, very few (if any) of these chatbots actually chat. And virtual assistants most often ‘assist’ in the same way that Amazon has been doing for roughly 20 years. That said, automating tasks with a bot still carries great value for eCommerce.

So, what else is out there?

AI bots also use rules, but rules do not define them. Instead, what we could call ‘truly’ artificially intelligent bots are designed, via machine learning, to learn and adapt on their own from their interactions with people.

These AI bots are hooked into multiple systems, data, and knowledge-bases. Many can understand and generate natural languages (speech and writing) too.

These properly AI bots are mainly the territory of the big tech players (think Microsoft, Amazon, Apple and Google). We think Duplex, the AI behind Google Assistant, is a great example since it functions around a natural human conversation.

As Google’s CEO stated, it is a big deal that brings together, “all our investments over the years in natural language understanding, deep learning, text to speech”.

Take a look at the demo video below and see what you think.

When we watched this demo we couldn’t help but think of a simple service conversation and wonder how that would go. You can draw your own conclusions.

Duplex is widely considered the current apex of NLP/conversational technology. Reactions range from thinking it is super-cool and the beginning of something big, to, well, thinking it’s all a bit creepy.

Still, Duplex is a ‘narrow’ AI. It can only handle very specific and simple appointments, and nothing else. But as we already know, most of AI's current value — especially where eCommerce is concerned — comes in bite-sized pieces.

We say: Bring on the bots! And we came up with a super-simple formula to sum it up:

That said, we should take the marketing claims for assistants and chatbots with a good pinch of salt.

Gartner predicted that by 2020 85% of customers will manage their relationship with enterprises without interacting with a human.

One particular example stuck out to us: “80% of chat sessions can realistically be resolved by a chatbot” (2016 PDF from Accenture).

In part two of this post, we’re going to put some of these claims to the eCommerce test by delving into real-life examples of service questions volunteered by our customers. We’ll discover what NOT to bot and more. 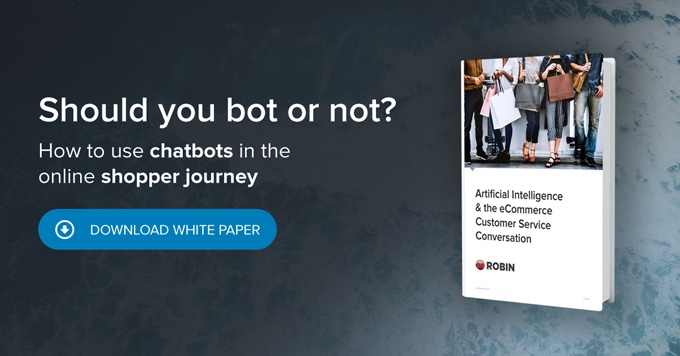